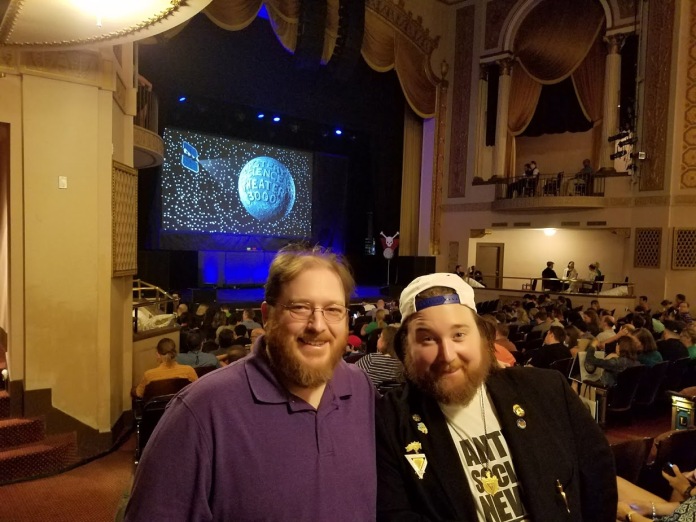 Okay welcome to the podcast. I know we’ve taken a couple a month hiatus but we’re retooling. We’ll be back very soon. We’re switching over to creative people. Creative works creative things in that note on that spirit. I am just barely 24 hours out of going to the Mystery Science Theater live tour. Watch out for snakes. This will be as best as I can a spoiler free gushing it’s not a review it’s not a it’s not a rating I’m not going to give you a thumbs up thumbs down if you are at all Mystery Science Theater fan.
0:42.74M1 You owe it to yourself to trundle down to the theater show up. Pony up your bucks. Seriously take your kids. It was a fabulous wonderful time at the show.

0:55.35M3 And now I’ll get into that. I saw the show in DC I went to The Early Show. Fantastic. Good venue right next to Ben’s Chili where all the presidents have to go get their picture taken at least once so. Across the corner is an Ethiopian restaurant that’s where we ate at. It was absolutely fantastic. And Tim Ryder I think he is in suburban feel free to email me in and correct me and all correct. The transcript from the website. I think Tim Ryder is Tom Servo or I could not find. I looked around trying to find the contact list but he was bone head Number one on the series. Now during the tour I think he’s doing Tom Servo on the thing or it might be Crowe. I’m probably getting all their names wrong. I just know that one either the actor who does Tom or crow could make the tour so they swapped it out. Rebecca Hanson she’s the she plays the Mary Jo peel lookin clone and she was absolutely animated on just had that energy to pump the crowd up. And of course she has that smooth Midwestern accent that we all grown to love and the new season here.
2:25.88M1 Joel was there is looking in fine shape. This has to have been a absolutely insane 18 months or so for him going from the Kickstarter to making the series to now going on tour. It’s just fantastic. And that’s really what I was going to talk about mainly is you’ve got this tour coming around and I have been to a lot of events like the Alton Brown show where you have a bunch of food network fans but Alton Brown fans but you have people that show who are snobs who are know it alls about food. And I’ve been to the mystery site I was part of the the Mythbusters tour and that was a super young crowd. There’s more kids than adults there I couldn’t take my kids because it was a school night on that one. I’ve talked about that on the podcast before. It’s all back on that. That was fantastic. You had a youthful energy in there. The thing you got at the show last night was a complete group of people that just loved what they were doing. They loved being in the theater the shirts that people wore. People had shirts to take me themselves. They just showed absolute love for things. I know. I mean there’s so many jokes and mystery science theater. I didn’t catch some of the jokes that were on the shirts but you could tell this joke that meant a lot to this person. They took the time to write out fantastic handwriting a shirt and so I absolutely loved it there’s a guy with aroused our shirt but to have him before the show during the show it after the show you really good sense of humor at certain we’d see you and we go to our. And he grinned and gave us the thumbs up thumbs up there a real sweet pair behind us to my brother. Nice picture. Got a good frame up of US and the stage and just super sweet. Everybody was so nice afterwards we stood around talking. I had to take off immediately because I had to leave about three hours from D.C. So I had to get the heck out of Dodge before it got too late. But it’s just you’re in a crowd of people who wish nothing but the best for what’s happening on the stage and nothing but the best for what’s happening with the people sitting next to them because we’re all in on the joke. It’s a giant inside joke that we’re all on the inside of and there’s such love for what what’s happening right there. It was just so neat. I had the the vibe of the thing. If you if you will if you’ve ever been in one of those like 40 shows at Universal Studios or at Disney World. It’s one of those things where they hype up the audience and there’s there’s skits that happen as you know in the show. If you watch the show at all. Heaven help you you should. But the stage itself need set up not a super detail as as I thought it was going to see from the things on line. But at this stage it seems a little smaller so I wonder I’m sure that people are going to have a different experience from the things I saw. The one thing I would absolutely dearly love for the tour to do is put up the cast list somewhere live because I just want to give shout outs to those people who did a fantastic job last night on Twitter and all that and I’m like OK I can find Tim right or can find Rebecca Hansen I can find of course Joel and Jonah Ray but I think Hampton was one of the ones that could make the tour. So I always like who who’s playing who up there. And of course they’re puppets but so I so it. And speaking of the puppets people in the audience brought their own Tom servo’s. I didn’t see anybody with their own homemade crow or rather robot but Tom Severus were on point. So so good handiwork there. And of course the people that made them were more than happy to say Here try it out. I mean super nice people’s. Just fantastic. Once again you’re in an environment where everybody is just just willing to be fantastic and it was it rose to the expectations I had. Another complaint I have about the audience that there was an A lot of kids there it was the early showing I was thinking oh I’m going to see a lot of kids there.

14:44.71M5 Outside we bumped into the drunk guy holding court about what was wrong with the whole new season. And I’m like OK here we have the opportunity. You know it’s it’s not a religion but we have Joel and Mike and Jonah. These are the new members of our pantheon. Don’t don’t spend your time fighting about who is the greatest host or whatever. Sit back enjoy the jokes enjoy the moment. You know it’s it’s it’s like arguing about who’s the best Star Trek captain. Clearly that’s Captain Sisko.
15:22.38M4 But enjoy it enjoy these new moments of this pantheon. Thirty years from now people like my son Joel is my son’s host my daughter. I showed her mike in Joel episodes to get her into it. And so she literally is to go with either those guys is saying hey here’s the host I remember J. She’s now just now getting into jota. But my son started he’s just 11 started with Jonah. So Jonah is always going to be his his first host and that’s a magical thing. You never get your chance to do a first again. And so 30 years from now when he’s telling his kids hey check out this show. There’s this guy named Jonah. And these robots and I’ll show you some of the other episodes too. And that’s the thing this celebrate what you love. Do the positive things. If you have a friend who’s never seen Mystery Science Theater grab them. Spin the wheel. Pick a random episode. New Series old series. Katie it was a KTLA TV. You know her pick one out of there and sit down with it. That was fantastic that my brother pointed out the gun solely from anti-social News. This was the first time he’d ever been in a theater where it was more than one or two of his friends watching it together. Nobody was to screen in that thing.
17:00.02M1 Nobody’s looking down at their iPad. It was absolutely fantastic it was absolutely fun. I could not have been happier with the way the night went. And I really wish I could have hung around and gone than some of the after get togethers because I think I think that same energy was going to just carry on into the night. So most of the people that got to go to the 9:30 show and I will be at the Richmond showing and I am taking my kids and following my own advice there.
17:29.48M5 I had attempted to date my kid the last one. So I would absolutely love hey if you are one of those people that’s made a crow bring your crow to the think man don’t want see a crow that somebody has made Tom servers are caught. I understand. Yeah they travel better. They’re smaller more compact but man oh horsey. I would love to see a crow would be so cool on Twitter. All the standard folks you used to seeing you know shout outs to all of them. I’m going to after I post this absurd tweet out to them. But I just want to say thank you for spending 20 minutes of your time to listen to me gush about this thing. Absolutely positively. See if you could see it in the theater. It’s such a neat experience.
18:17.75M1 You’re breathing the same air you’re sharing the same ground as the mystery science theater folks these comic geniuses brought this this this this passion project a lie. The only really hilarious thing at all. I just didn’t know this. This is kind of a spoiler but I’ve seen it in other of these traveling shows or they have the recorded thing and they say here in your state of and they posit of course DC is not a state it’s it’s just the Bulworth there.
18:53.63M6 Rebecca Hansen that was a moment where she shined because you just cut a punch did it. I can’t remember what she even said but she. She just you know is said something pumped her fist and the whole crowd just was like bored or they’re like yeah yeah yeah. Honestly you’ve been backed in a corner here that you could do this. And so it was just it was a magic little moment.
19:14.93M1 That won’t happen anywhere else. And so yeah that was sweet. I really liked it and I mean it just. Still 24 hours later it’s still carrying me along. Booing me in a cloud of happiness.
19:31.46M7 Absolutely wonderful show.
19:34.91M1 Joel Hudson robots Whoever’s doing your voices and actions. Rebecca thank you all and absolutely wish you all the best in the world. Thank you for making me a super happy guy and I can’t wait to see you guys in Richmond. Thanks. Goodnight y’all. And the next podcast is coming up soon.