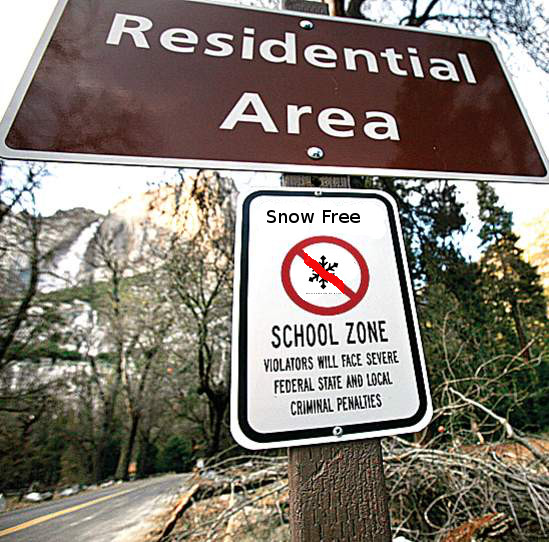 WASHINGTON, DC- With reports of record snow fall in the next few days, DC’s Democrat run city council looks for progressive ways to protect the population of the nation’s capitol.  With some brain storming they realized the sure fire way to prevent mass snowing: Snow Free Zones.  The city hastily printed thousands of “Snow Free Zone” signs all over the district, letting man and nature know that higher penalties will be in place if they snow in that vicinity.  The President applauded this measure and invited the city council to the White House for photo-ops.

The leaning on laws and more gun legislation has been a political crutch and kicking the debate around has been a political soccer ball, but do politicians really want to make the world safer?  History would clearly say, “No.  No, politicians, especially Democrat politicians, do not want a safer world free of gun crime and gun violence.”  History is obviously being a jerk, right?  How dare History and his a-hole buddy Facts and his witch girlfriend Statistics all say that big-hearted dems like Pres. Obama, Martin O’Malley and Rahm Emanuel don’t really want to see a safer place to live with less gun crime?  How dare they!?  Well, in all fairness, history, facts and statistics only show the actual results, not the intention.  But, if I saw my brother touch the stove and burn his hand, I should have a reasonable expectation of what would happen if I touch the stove, too.  If I touch the stove too, well, I’m stupid or one of those people that like- umm, feeling the burn.

The gun control legislation proposed in Democrat controlled cities always focuses on legal gun owners and sellers and many of them even focus on limiting the right to defend oneself.  Gun crime goes up because laws are not magical and criminals don’t follow them.  So, people come up with innovations and inventions to help protect their people and does the city say thanks?  Well, let’s look at the case of TASER.  Taser CEWs (Conducted Energy Weapons) were created to provide an alternative to guns for Law Enforcement and, for the victims of violent criminals, an alternative to being robbed and murdered.  How did Baltimore respond?  Did they say, “Wow, you’ve used technology to evolve the self-defense debate.  That changes things and maybe we should encourage you to continue developing innovative self-defense technology.”  HAHAHAHAH no, of course not.  Baltimore and DC rushed to OUTLAW Tasers because they are scary, dangerous weapons that could possibly kill people.  That’s right, they don’t let the Metropolitan Police department in Washington, DC. carrying Tasers because they are dangerous…  THEY CARRY GUNS!- but they are not allowed to carry a Taser because THEY MIGHT KILL SOMEONE!  I’m sorry for all the caps but the stupidity is so thick in those facts, it’s suffocating.*

DC, Baltimore and Chicago have again and again proposed and implemented  laws that don’t help and then discouraged innovation and invention.  Why would they do that?  Is it because they want to solve the issue another, even smarter way?  Nope, they just keep doing the same failed things.  So maybe they don’t want to solve the problem at all?  Seems that way, because then you can take that to the next election a tell everyone that “We have all the answers on how to end gun violence and you all have to vote democrat, or you are sure to die in a hail of bullets, because Republicans=Guns and Guns=bad.  Vote Democrat!  That will solve everything and there’s no need for you, the voter to think about anything else or even be anything but a voter.  Voting Democrat will save the world and all the children in it!”  Come on, knock it off.  Can we just be grown-ups about this and talk about actual prevention measures that could make the world safer?

Things that need to be discussed:

If we evolved, instead of just screaming “guns are bad!” we could live in a world where situations are quelled efficiently and justice is served.  Let’s imagine a run-down of three armed men, would-be mass shooters, walking up to the entrance of a mall, the security intercepts them neutralizing 2 of them with non-lethal CEWs and the 3rd escapes capture but is tracked down immediately by police by tracking his digital signature and face thanks to digital video and cellular data image collection.   Is that crazy?  Well, if you are a Utopian, you’d say it is crazy only because bad people don’t exist and bad things just shouldn’t happen.  But, bad people do exist, and they do really bad things sometimes. Whether god, or their neighbor’s dog is commanding them to, bad people do bad things.  We can’t read everyone’s mind, but we can encourage innovation and invention in technological advancements of self defense and law enforcement tools.

*if anyone read this and thought “TASERs are dangerous, they DO TOO kill people!” I’ll try to be objective here and reply scientifically and honestly:  You’re an idiot.  Tasers kill people the way showers kill people, the way that they don’t- but you might slip and fall.  If you get tazed, then fall down a flight of stairs and die, the TASER didn’t kill you, the fall don’t the stairs did- the alternative  is getting shot BY A GUN and dying BEFORE you fall down the stairs.  Does that sound better to you?  Well, if it does, I respectfully thank you, DC council member, for reading this and would like to remind you of the start of this statement.  You’re not smart, so stop outlawing stuff smart people made only because you are a regressive who is scared of technology.

There’s been a big focus on gun control and ways to stop gun crime recently.  One of the 1st common sense Gun Control laws I see as needed are rules against posting signs stating “Gun Free Zone” in areas where absolutely no entry control protocols and routine screenings are in place.

Many of the “Mass shootings” that Pres. Obama talks about so much and has even been seen crying over have taken place in “Gun Free” zones.  If a building manager posts such a sign without implementing intense security measures, they provide the patrons with a false sense of security.  The only way one should legally be aloud to declare an area a GFZ is if they have an armed officer or officers posted at entrances with a metal detector.

If areas truly want to prevent people from entering their theaters with guns, they need to logically approach the subject because a sign that says something is not a magical talisman that wards off danger.  Instead of magic, someone walking out of a GFZ movie theater alive is merely the chance survival of Schrödinger’s cat, the only difference is Schrödinger wouldn’t have been so presumptive to mark the box “Alive Cat Zone.”

So, if you are to continue you posting GFZ signs you will need to amend it to state:  “This is simultaneously an armed area and a gun free zone until you either survive or are shot.” Seem ridiculous?  So are fake Gun Free Zones.

In the meantime, I’m not going to go to work, I’m just going to fasten a “Rent Free Zone” sign on my door.  I’m sure my leasing office will understand the same way mass shooters understood GFZ signs.